Historical exploration by BHP Minerals and subsequently by Astro Mining in the 1990s confirmed the presence of heavily enriched monazite sands almost 30 years ago. 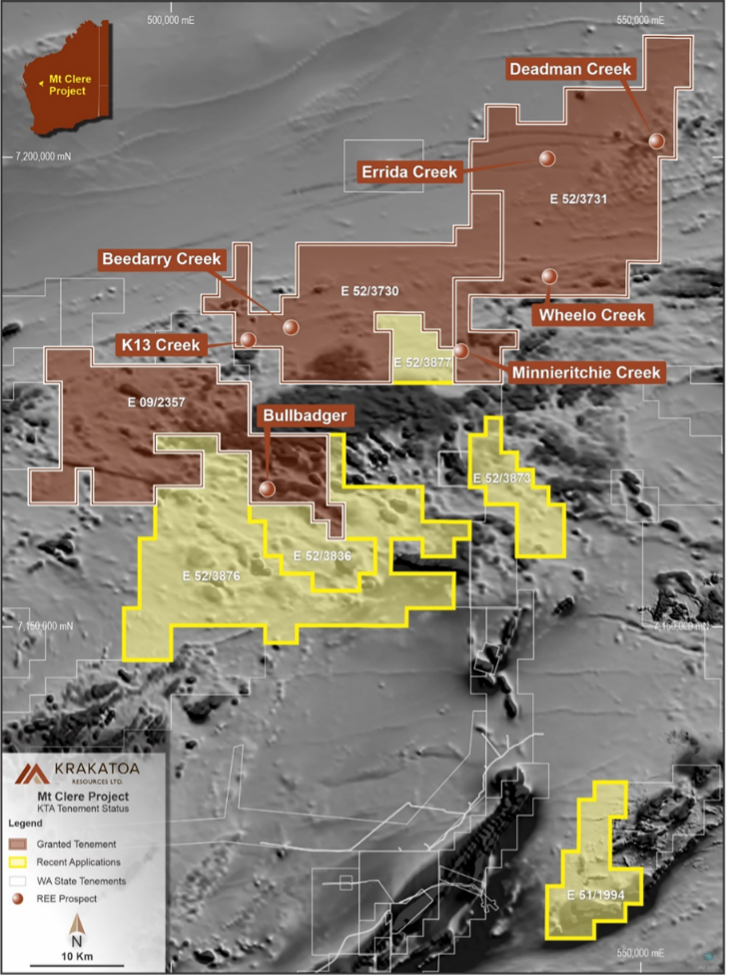 The tenements cover regions of structural complexity within dense rocks of the Narryer Terrane thought to represent reworked remnants of greenstone sequences. The Narryer Terrane contains the oldest known rocks in Australia (c. 3730 Ma), being some of the oldest known rocks on Earth. It consists of several groups of gneiss derived from granites, and interleaved metasedimentary and mafic metaigneous rocks.

Carbonatite dykes and lamprophyre dykes, which have been identified in diamond exploration, are probably common and could have been emplaced at this time.

The Yilgarn represents the deepest and most severely weathered region in Australia. Large tracts are covered by a considerable thickness of regolith, being dominated by sand plains, laterite and transported sedimentary cover.

The tenement is covered extensively by laterite, which is being eroded into unconsolidated sand, silt and gravel in braided steams and broad alluvial sheet-wash and colluvial plains. The presence of this regolith can commonly be a major impediment to exploration, but here monazite is concentrated in the alluvial areas and REE probably is enriched in the lateritic regolith, so regolith is the primary exploration target.

The  Errabiddy  Shear  Zone,  a 5km  to  20km  wide  major  crustal  suture  that  binds  the  accreted Palaeoproterozoic Glenburgh terrane to the Archaean Yilgarn Craton is partly captured within Krakatoa’s applications. Such reworked craton margins are a favourable setting for many large-scale gold and base metal deposits, where long-lived crustal-scale structures can act as conduits for the transfer of heat and mineralising fluids from the upper mantle. The structural corridor associated with the Errabiddy Shear Zone offers the Company further significant gold exploration opportunities.

The Project contains significant opportunities related to rare earth elements, in particular across the widespread monazite sands concentrated within drainage networks of the northern applications. Previous work by BHP and Astro Mining NL confirmed the ample presence of monazite in pan concentrates, with grades exceeding 50% in a large number of samples resulting in an anomaly exceeding 15km²

The source of the monazite is postulated as coming from REE ion adsorption on clays within the widely preserved, deeply weathered, lateritic profiles developed in gneissic rocks. Monazite-rich carbonatites in the adjacent Mt Gould Alkaline Province could also provide a source.

The Mt Clere area include several extraordinarily, high tenor thorium radiometric anomalies which cover vast areas. Some anomalies correspond with alluvial/colluvial/sheetwash areas, where Astro pan concentrates returned remarkably high percentages of monazite, up to 48%. Several thorium anomalies appear to be caused by substantial placer concentrations of monazite. Others correspond with the incised remnants of laterite widely preserved in the project area.

These deeply weathered terrain developed in the country rocks (laterite) may represent the primary sources for the monazite found within the drainage networks and may support the prospectivity for ion adsorption REE clay-type deposits similar to those found in South China. The supergene, ion-adsorption REE clay deposits are formed as a result of in-situ lateritic weathering of REE-rich host rocks, leading to the formation of aluminosilicate clays that are capable of adsorbing dissolved REE. Coincident areas between deeply weathered bedrock and high tenor radiometric thorium form a prime target for this style of REE deposits.

The ultimate bedrock source of the thorium and REE remains unknown. Swarms of alkaline ultramafic dykes (lamprophyres/carbonatites), mostly obscured by laterite, are a potential source. Alternatively, a pegmatite-rich granite gneiss such as that identified at Mt Clere may be the source. Each forms an exploration target, in addition to the more widespread placer and lateritic concentrations.

The GSWA  stream  sediments  capture  distinct  carbonatite  signatures   (Nb-Ce-Y-Th  anomalies)  in drainages adjacent to where Astro identified three lamprophyres. The signatures may be genetically related to a hidden carbonatite, obscured by the extensive laterite cover in the anomaly hinterland.

Other valuable heavy minerals such as zircon (to 60%), ilmenite (to 29%) and leucoxene were recovered in samples from the same area, favorable for large placer resources of easily recoverable material.

From 1995, exploration programs were completed by BHP, Astro Mining NL, and All Star Resources Plc. A summary of this work is detailed below.

Between 1985-1987, a comprehensive programme of stream sediment sampling, heavy mineral sampling and mineralogical analysis across the eastern portion of the Mt Clere Rare Earth Project, targeting Pb-Zn-Ag mineralisation similar to that found at Broken Hill.

Heavy mineral sampling was completed at the approximate density of 500 samples per 1,000km2. The sampling confirmed the presence of gahnite (a mineral associated with Pb-Zn-Ag mineralisation at Broken Hill) but failed to locate any base metal mineralisation.

The ample presence of monazite in pan concentrates, with grades exceeding 50%, was confirmed in greater than 20% of the 176 samples. BHP classified the samples as follows (WAMEX Report A30270):

The anomalous samples have not been investigated further, nor has the REE distribution within the monazite been assessed. Given The samples also report varying levels of ilmenite and zircon.

Petrographic analysis of 20 samples sites across the Project area confirmed the following accessory occurrences, which are indicative of REE prospectivity:

Between 2005 and 2006, Astro Mining explored the western portion of the Mt Clere Rare Earth Project for diamonds. Nineteen discrete, primitive, alkaline lamprophyres were located during their search, which involved stream sediment sampling and geological surveys.

Though no micro-diamonds were recovered by Astro, grain counts of mineral species in selected samples of heavy mineral concentrates produced extraordinarily high monazite (up to 48%) and very high zircon (up to 60%), ilmenite (up to 29%) and leucoxene (up to 20%). The results independently validate the thorium and REE prospectivity latent in the Project (WAMEX report A58632).

Diamond exploration was unsuccessful for Astro. However, their work has proved very fertile for rare earth elements, niobium and thorium mineralisation. The company recognised lamprophyre rocks of a deep crustal origin within a highly complex area located at the edge of an Archaean craton. This supports the area as having the considerable potential for a suit of intrusive alkaline ultramafic rocks, including carbonatites which are known hosts for REE.

All Star collected two large samples of alluvium in 2006 to produce a heavy mineral concentrate. Each concentrate was sent for analysis and microscopic mineral examination at Genalysis Laboratory Services. The two samples respectively returned 3% and 2% monazite, as well as 1.4% zircon, 40% and 44% ilmenite, and 9.9% titanium. Rare earth elements, cerium and lanthanum, reported at 0.46% and to 0.25%, respectively. Prior to grant of the exploration licence, the Company will complete the following: