The Rand Gold Project, covers a substantial area of 580km2 in the Central Lachlan Fold Belt, New South Wales and is 100% owned by Krakatoa Resources.

Krakatoa was granted the Rand Project in late 2020 after direct application. The area is prospective for shear-hosted and intrusion-related gold systems. The area covers a 40km structural corridor that transects mineralised Silurian and Devonian granite and Ordovician sediments, mostly obscured by colluvium and underexplored.

It also captures the historical Bulgandry Goldfield, which includes several mines that produced gold at very high grades (up to 265g/t gold).

The Project lies in the Tabberabbera Zone of the Central Lachlan Fold Belt between two regional shear systems. The Geology is dominated by Ordovician-aged sediments of the Abercrombie Formation.

Rand geology comprises of Ordovician-aged sediments of the Abercrombie Formation, including feldspathic-micaceous sandstone interbedded with laminated siltstone and mudstone. The Abercrombie Formation is intruded by the Silurian Goombargana granite predominantly in the south and Devonian Jindera granite in the east of the Project. Felsic volcanics of the Devonian Wallandoon ignimbrite lie along the Project’s northern boundary. Several apophyses of the Goombargana granite crop out within the project area, which is mostly dissected by faulting. Much of the Paleozoic geology is deeply weathered and obscured by Tertiary to Recent sediments up to 50m thick.

The project sits in the Tabberabbera Zone of the Central Lachlan Fold Belt between two regional shear systems., the NW-trending Kancoona shear zone (located near Coreen) in the west and the north-trending Kiewa shear zone to the east. A SW-trending shear zone transects the entire tenement package linking the two regional shears. The shear zone bifurcates into several subordinate splays forming a distinct structural corridor some 40 km in length (. The subsidiary shears develop a distinctive pattern (similar to a diffraction array in appearance) upon exiting the Goombargana granite in the west, which supports a westward propagation. The Goombargana granite failed brittlely promoting a north-block westerly shear sense. The Abercrombie Formation sediments in contact with the Goombargana granite also fail progressively resulting in an anastomosing interlocking network of shear zones. Gold mineralisation in the Central Lachlan is spatially related to the granitoid bodies, their contact aureoles and associated regional structures.

Gold and Tin mineralisation occur within veins related to main northeast-striking faults in the Goombargana Hill granite. Gold mineralisation is most likely introduced with the emplacement of the I-type Jindera granite during the Tabberanean Orogeny. Therefore, Rand is considered prospective for the intrusion-related gold (IRG) deposits.

It is considered that the gold mineralisation in the Bulgandry Goldfield is hosted in quartz lodes in a regionally persistent shear zone. The shear-hosted mineralisation is best exemplified by the high-grade Show Day Reef group of workings which directly lie over an interpreted primary shear. The gold at Bulgandry resides in narrow, sheeted quartz veins and stockworks within the Abercrombie Formation. Alteration associated with the veins is weakly expressed as a narrow centimetre-scale selvage, and observations support visible gold in quartz veins exposed in and around the historical workings. Mines Department records indicate that some workings contain evidence of intrusive dykes and felsites.

Recent mapping by Krakatoa has found intrusions within the underlying Bulgandry area. 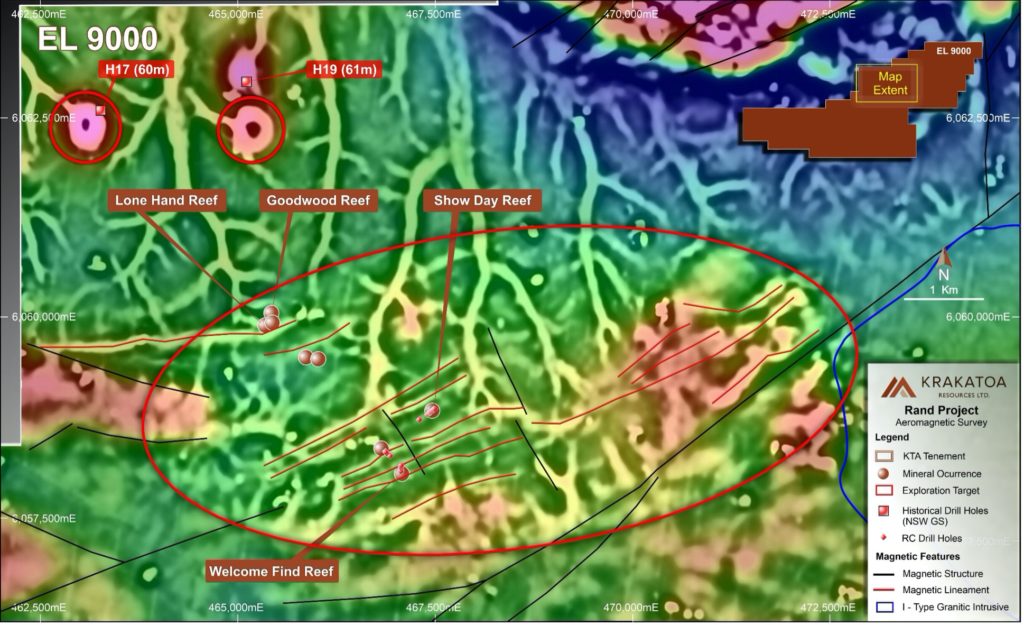 Gold was discovered at Bulgandry in 1894, with the peak of activity occurring in 1895 and 1896. Further production happened in the period between 1932-35, where mining was extended to depths of 30 metres and grades were very rich, up to 265g/t.

Historical mining widths are poorly documented. However, a 2.6m wide lode was exploited at the Welcome Find reef. The total recorded gold production, from incomplete records, was 76.45 kg (2,458 ounces). High royalty demands from private landowners saw many mines abandoned by 1901 with all production in the camp ceasing during the drought of 1902. Table 1 summarises the reported production from the main historical workings present in the Bulgandry camp.

The known workings occur on small windows of deeply weathered and extensively leached bedrock in the variably thick blanket of recent sediments (Figure 1). Past exploration has concentrated on the areas of outcrop and was limited to the Show Day and Welcome Find Reefs. The Lone Hand and Goodwood Reefs have not been explored since their original closure pre-1902.

Transit Mining Pty Ltd explored the Welcome Find and Show Day Reefs between 1985 to 1989. Transit collected fourteen rock chip samples during geological mapping. The samples returned strongly anomalous results in Au (including 9.6ppm, 6.9ppm and 6.5ppm), Ag (to 31ppm), As (to 2410ppm), Bi (to 40ppm), and Pb (to 5100ppm) (Elliot, 1986). Granite outcrop was identified within 50m of the Show Day Reef, and a road cutting 800m from the same mine also produced anomalous gold, supporting near-term exploration upside.

Access to the Lone Hand reef and Goodwood reef mines was not obtained by previous explorers and remains unexplored by modern techniques.

In late 1988, Transit developed 17 short inclined reverse circulation holes for approximately 525m drilled. The program included six holes at the Welcome Find Reef and eleven holes at the Show Day Reef at an average depth of approximately 30m per hole, with a maximum depth of 39m. All holes terminated in the deeply weathered and leached upper regolith: a zone where gold is commonly depleted or leached altogether. Encouragingly, several drill holes terminated in mineralisation and/or display anomalous gold towards the end of hole. The results include:

These results confirm gold is being leached from within the upper saprolite and indicate that satisfactory drilling depths were not achieved. No subsequent exploration work was conducted. The Company considers the Bulgandry Goldfield as largely untested; especially the Goodwood and Lone Hand reef areas.

Goombargana Hill is a prominent granite body that rises over 200m above the surrounding plains. Limited exploration work has been completed across the area, with reconnaissance sampling of quartz veining within the Goombargana Hill granite by Cullen Resources in 2005, (EL6235), returning 4.13ppm Au and 0.28ppm Au with anomalous Ag, As, Bi, Mo, Pb, and Sb. Cullen considered no further work and withdrew from the farm-in after their partner failed to meet their obligations. The Company believes the gold occurrences at Rand fit within the classification of significant gold deposits known as Intrusion-related gold systems (IRGS). Granite or sediment-hosted sheeted veins and stockworks like those already identified at Bulgandry are considered characteristic of IRGS systems.

The historical Bulgandry Goldfield demonstrates the project area is prospective for shear-hosted and intrusion-hosted gold. Historical production records show substantial gold grades, including 512oz from 60 tons and 70oz from 74 tons, was respectively won from the exposed quartz veins in the Show Day and Welcome Find reefs at Bulgandry.