The project is located in the central division of the Molong Volcanic Belt (MVB), between the world class Cadia Valley Mine complex (Newcrest Mining) and Northern Molong Porphyry Project (Alkane Resources) and is adjacent to the Copper Hill porphyry Cu‐Au deposit.

In late 2019, the company acquired a 100% interest in EL 8153 being the Belgravia Project covering an area of 80km² (Figure 1) located in the tier 1 mining jurisdiction of the Lachlan Fold Belt, New South Wales, Australia.

The project lies 7km east from the town of Molong and around 20km NE of the major regional centre of Orange, providing excellent road, rail, power, gas and water infrastructure.  Terrain covering the Project is mostly undulating and mainly consists of open grazing land, providing excellent access. The Bell River passes through the northern and eastern parts of the licence.

Geologists have concluded that Belgravia is highly prospective for:

There are currently seven initial Cu‐Au targets for immediate consideration by the Company: 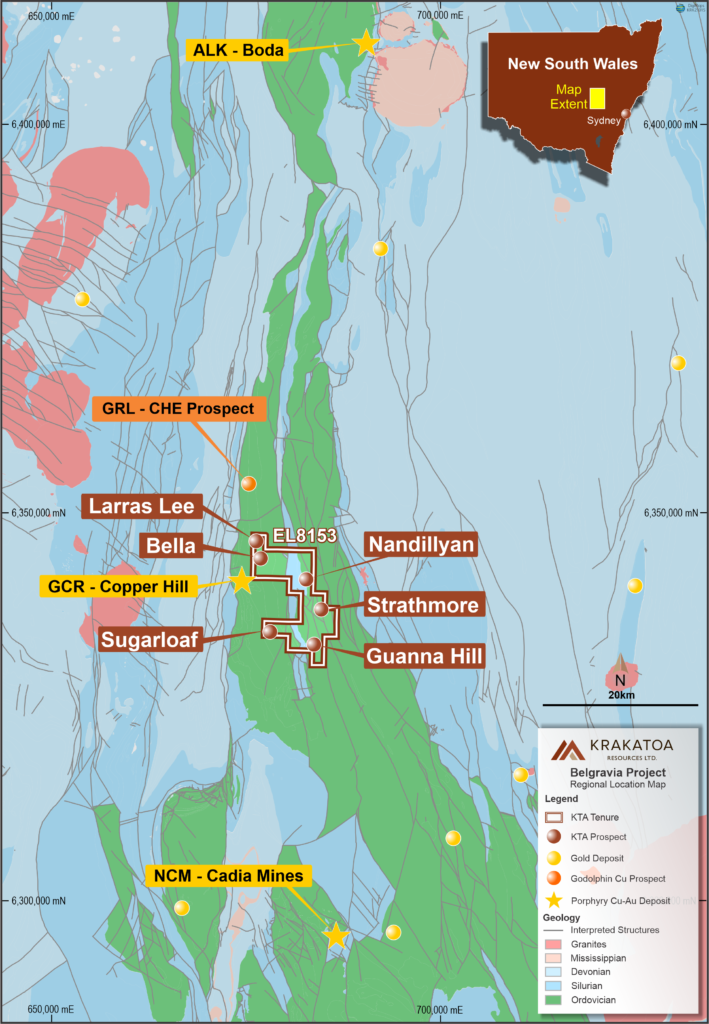 THE BELGRAVIA PROJECT IS LOCATED IN THE CENTRAL PART OF THE MOLONG VOLCANIC BELT (MVB).

Which forms as part of the East Lachlan province within the Lachlan Fold Belt. The MVB is a remnant of the disrupted Macquarie Arc, an island arc system composed predominantly of north-south trending, fault‐bounded belts of andesitic lavas, tuffs and limestones, intruded by rare, stock-like monzonite, diorite, tonalite and dacite bodies from Ordovician to early Silurian times.

The eastern, Oakdale Formation, and western, Fairbridge Volcanics, are the main components of the Ordovician arc present. Proximal volcaniclastic rocks and alkalic basalt dominate the Fairbridge Volcanics; whereas, the overlying Oakdale Formation consists of more distal volcaniclastic rocks and limestones. Unconformably overlying these rocks are Siluro-Devonian limestones and sandstones which onlap the Ordovician from the west. A veneer of Tertiary basalt and minor sediments up to 40m thick obscures most rocks. Remnants of a deeply weathered surface are locally preserved beneath the basalt.

Intrusions associated with key skarn and porphyry copper-gold deposits in the MVB are dominantly the Early Silurian shoshonitic intrusions and lavas, which display intense alteration and distinctive magnetic responses.

PORPHYRY AND RELATED SKARN MINERALISATION WITHIN THE EAST LACHLAN PROVINCE IS ASSOCIATED WITH THE INTERMEDIATE MAGMATISM, WHICH WAS FOLLOWED BY SILURIAN REGIONAL METAMORPHISM AND DEPOSITION OF OROGENIC GOLD DEPOSITS. CONTEMPORANEOUS VMS-STYLE MINERALISATION RESULTED IN DEPOSITS IN INTRA-ARC RIFT BASINS OF THE MACQUARIE ARC.

Within the MVB, four major porphyry systems are identified:

The CHIC is comprised of appropriately aged and oriented intrusive rocks and shares many other geological similarities to the Cadia Intrusive Complex to which it is considered analogous.

CHIC hosts the Copper Hill deposit which is reported to be the oldest mined Cu deposit in NSW. This deposit contains high-grade mineralisation (1.0% Cu and + 1.5g/t Au) which occurs in stockworks and sheeted vein sets within and forming carapaces to dacite porphyries exhibiting intense hydrothermal alteration, with local quartz-magnetite and carbonate veining. Lower-grade mineralisation (average 0.3% Cu and 0.3g/t Au) occurs as thin veinlets and very fine-grained disseminations of chalcopyrite and pyrite with variable alteration within dacite porphyries and andesitic lavas and tuffs. Moderate to strong hydrothermal alteration accompanied dacite intrusion, giving rise to mainly potassic, chloritic, sericitic and propylitic alteration in both the intrusives and adjacent Ordovician volcanics

The eastern half of CHIC is mostly captured by the Belgravia Project, where it is overlain and obscured by Tertiary Basalt, as shown in the above magnetic and radiometric imagery. The margins of the CHIC and another intrusive to its immediate north, the Larras Lake Diorite, represent important targets for future exploration by the company. 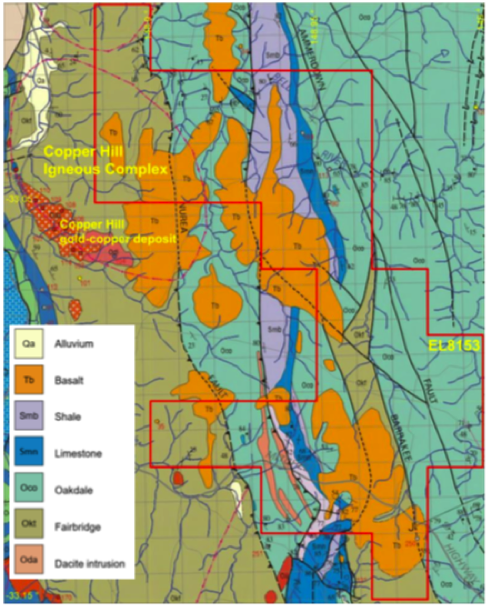 The Belgravia Project sits along trend, approximately 70km south of Alkane’s recent porphyry discovery where clear evidence of Cadia-style mineralisation has been identified. The world-class Cadia Valley Operations (CVO), which includes Cadia East, Ridgeway and Cadia Hill, lies 40km to the south. The Cadia East mineralisation is divided into two broad overlapping zones: an upper, copper-rich, disseminated zone, and a deeper, gold-rich sheeted vein zone nearer the main monzonite porphyry bodies. The copper-rich portion is stratigraphically limited to the volcaniclastic unit. The gold-rich zone is centred on a core of steeply-dipping sheeted quartz-calcite-bornite-chalcopyrite veins. The known mineralised system extends approximately 2.5 kilometres east-west, 0.7 kilometres north-south and 1.8 kilometres vertically. Between 80 and 200 metres of post mineralisation sandstones overlie the deposit. Similarly, between 20-80m of Miocene cover and some 450m of the Ordovician host-rock sequence overlie the Ridgeway deposit.

01/12/2019
Belgravia Acquisition Completed  The Company completed the acquisition of the Belgravia Project, with all conditions…

01/11/2019
Review of historical work Following technical due diligence, the Company moved swiftly to commence a…

Geological mapping, soil and rock chip sampling dominate the previous exploration, with the crucial results and targets summarised in the prospectivity section below.

Nine aircore holes for an advance of 101.5m (averaging under 12 metres per hole) are developed across the entire project. No assay data is available on the aircore holes but with up to 40m of basalt cover, these are considered insignificant.

The plausible reasons for the lack of drilling were highlighted earlier and are related to a blanket of basalt, up to 40m thick, that is draped across the landscape obscuring the underlying rocks and any contained mineralisation or alteration. Leached country-rock preserved beneath the basalt may further confuse or mask signatures related to mineralisation. The impost of regolith development at Belgravia to general exploration, along with the limited drilling, provides excellent leverage for shareholders.

Review of the surrounding deposits like the CHIC and CVO and other projects within the East Lachlan province demonstrates that the known resources are confined to areas of outcrop or limited cover.

They compare with the Belgravia Project, which is mostly overlain by a blanket of Tertiary basalt up to 40m thick (Figure 3b; cyan colour). This blanket has served to obscure or mask completely geochemical signals from any underlying mineralisation and has greatly restricted historical exploration both within the project area and the adjacent districts.

Geologists have concluded that Belgravia is highly prospective for:

There are currently seven initial Cu‐Au targets for immediate consideration by the Company: