The Turon project covers 120km2 and is positioned approximately 50km east of the Company’s Belgravia project and 60km northeast of Newcrest Mining’s Cadia Valley Mine in the Central Tableland region, NSW.

The Turon area has been the site of significant alluvial and hard rock gold production, dominantly in the 19th Century.  The area contains four main groups of historical mineral occurrences. These being the Quartz Ridge group, Turondale Group, Millah Murrah group and the Dam Creek group.

The major gold domains are located in the two separate dominant north-trending reef systems of the Quartz Ridge and Turondale Groups; comprising numerous workings and quartz reefs that strike over 1.4km and 2.4km respectively.

Limited drilling and lack of modern systematic exploration has inadequately tested the known historical mineral occurrences and surrounding prospective areas within the license.

Location of the Turon Au Project in relation to KTA’s Belgravia and NCM’s Cadia Mine.

The Turon Project is situated in the Hill End Synclinorial Zone or Trough, north of the Bathurst Batholith. It straddles the moderate to tightly folded, north-plunging Tripleys Creek Anticline.

To the west is the Hill End Anticline and Fault and to the east the Waigdon Thrust. The various domains are comprised of Devonian and Silurian sediments intercalated with felsic volcanic and volcaniclastic rocks, and minor limestone. Three Carboniferous granitic stocks intrude these domains. They parallel and lie north of the 35km wide Lachlan Transverse Zone (LTZ). Sediments of the Hill End Trough rest on Ordovician volcanic and intrusive rocks of the Macquarie Arc and are up to 5km thick. Deformation associated with the Middle Devonian Tabberabberan Orogeny (~380Ma) closed the basin. A veneer of Late Devonian sediments postdates the Tabberabberan Orogeny and was gently deformed by the Kaniblan Orogeny (~355Ma). Granites of the Bathurst Batholith intruded the region at ~340Ma.

Orogenic gold vein deposits occur adjacent to, and throughout, the Hill End Trough. In the Turon Project, gold mineralisation occurs in association with bedding parallel quartz veins (up to 10m wide) that commonly express as strike ridges within the metasediments. During the 1850s gold rush, many surface slot mines and underground mines chased vein quartz for their gold. 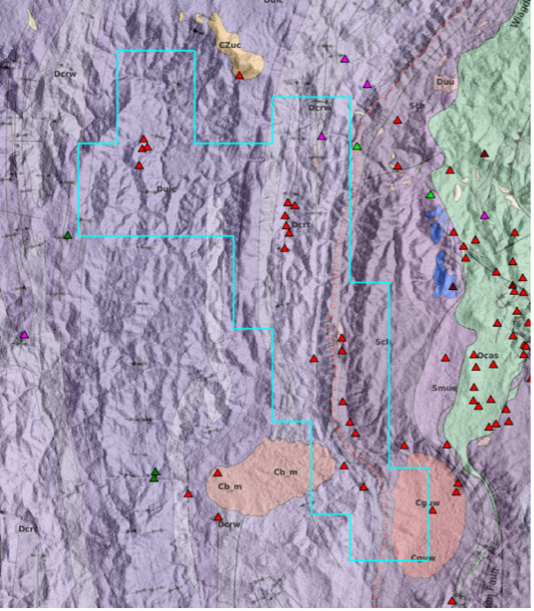 A number of mineral deposit styles are present in the Hill End Trough.

The Quartz Ridge Group was mined pre-1878 with shallow underlie shafts, pits, drives and crosscuts. An adit (approximately 130m long) was mined from the western slope (640m ASL) to the Dead Horse reef. The total amount of gold produced from the group remains unknown.

The Turondale Group includes the Box Ridge, Homeward Bound Reef and Britannia prospects. This cluster of workings share similarities with the Hill End goldfield. The system of reefs can be traced for over 2.4km, along the north-south trending hinge of a regional anticline.

Mining on the Turondale Group occurred before 1877 with no records of the amount of gold produced. Shallow water tables restricted development to less than 30 metres.

The Millah Murrah prospect is described as a structurally controlled high sulphide base metal (+/- Au) hydrothermal metamorphic vein and warrants examination for VHMS. The prospect area is potentially similar to the Sunny Corner deposit to the southeast, which at one time was the largest silver producer in NSW and contains an Inferred Mineral Resource of 1.5 Mt @ 3.7% Zn, 2.1% Pb, 0.39% Cu, 24 g/t Ag and 0.17 g/t Au (Argent Minerals 2015 Annual Report, restated under 2004 JORC Code at a 2.5% combined base metals cutoff grade: https://www.asx.com.au/asxpdf/20150904/pdf/4313l574jkg1yc.pdf).

Several linear features apparent in satellite imagery are thought to represent shear zones suggesting the potential for shear hosted mineralisation similar to the nearby Spring Gully.

Known gold mineralisation is spatially associated with the Waigdon Thrust Fault, with several mines located along or near this structure.

The Chesleigh Group, which crops out in the projects east, elsewhere hosts the Belara and Sunny Corner base metal mineralisation. Significant mineralisation is also hosted by middle Carboniferous granites and other related intrusives, where they intrude the Chesleigh Group, including Climax Porphyry Molybdenum type, Mt Pleasant Deposit, and the Mount Tennyson molybdenum–tungsten skarns and greisen/pegmatite related mineralisation associated with the emplacement of the middle Carboniferous Bathurst Batholith. Two such granites, Wiagdon and Millah Murrah, intrude the project’s southern parts.

The Turon River, Quartz ridge and Turondale were sites of substantial gold rushes in the 1850’s and 1860’s.

The area has had a history of significant alluvial and hard rock production, dominantly in the 19th century. Since the start of the modern exploration license system in 1965 there have been several major exploration pushes covering the current license area.

There are four main or well-known historical mineral occurrences groups that exist within Turon license area.

Gold was found at Quatrz Ridge in 1852. By 1872 the area had transformed to a mining mecca, where the whole line of the reef from Quartz Ridge to Deepdale was leased, a distance of 6km. by the 1910’s many shafts and tunnels were driven with major workings at Dead Horse reef, Millers hill, Lord Nelson reef, Just in time reef and Quartz ridge being the dominant areas for historical mining. Reported recoverable grades from these mines ranged from 13.5 – 30 g/t gold. From 1914 to the start of the modern exploration licenses system in 1965 only sporadic attempts of redeveloping the mines and exploration have been reported.

During the period 2010-2014, Centius Gold Limited conducted field-based exploration programs in the area collected a total of 87 grab rock samples. The results from the samples confirmed the gold prospectivity of the Quartz Ridge Group and the previous sampling by Strachan. Significant results included 17.15 g/t Au (DH61), 12.55 g/t Au (DH13) and 11.30 g/t Au (DH84).

The Turondale Group includes the Box Ridge, Homeward Bound Reef and Britannia prospects. Till now, no systematic modern exploration has been conducted within the Turondale Group area. However, it was in 1866 that the gold rush to this area had begun. The main reefs associated with the Box ridge area were the Britannia, Homeward Bound and Shakespeare. Other numerous mines were also developed in the area. The Britannia and Great Shakespeare mines produced much of the gold in the area. The excellent returns from these mines prompted the development of a new battery to open in 1872. The mines slowed were sporadically mined until the early 1900’s due to water flooding becoming problematic. Alluvial mining along the Turon river had become more favourable over hard rock mining in the late 1800’s and into the mid 1900’s.

It was not until in 1989 that a very brief exploration program at the Britannia Mine was conducted by BHP. Notable results produced from that exploration program include 60.6 g/t Au (TD/B15) and 10.6 g/t Au (TD/B5). During 2006-2019, Companies such as Oroya Mining Limited, Neo Resources Limited and Perpetual Resources Limited, held significant landholdings across the Sofala region, which includes the Turondale Group. However, their exploration works mainly concentrated on other areas and prospects.

The Millah Murrah prospect is considered potentially similar to the Sunny Corner deposit to the southeast, which at one time was the largest silver producer in NSW and contains an Inferred Mineral Resource of 1.5 Mt @ 3.7% Zn, 2.1% Pb, 0.39% Cu, 24 g/t Ag and 0.17 g/t Au.

This area contains several alluvial occurrences with no known hard rock gold sources. Satellite imagery has suggested that this area may have the potential for shear hosted mineralisation similar to the nearby Spring Gully.

Limited to no systematic modern exploration has been conducted within the Turondale Group area.

The Turon Project is considered to be prospective for: