Based on promising rock-chip results an 11 vertical hole, RC program (DRC001 to 011) totalling 1,066 metres was completed in September 2017. The drilling was designed to:

The holes were drilled as three lines and targeted the flat-dipping pegmatites immediately east and northeast of the open pit. The target areas were tested with three lines of holes. The southern line drilled shallow, flat-lying pegmatites adjacent to the southeast corner of the pit and tested for deeper underlying mineralisation. The central line of three holes targeted the line of mineralisation immediately north of the pit and a deeper, approximately 30-metre-thick pegmatite. The northern line tested the further strike extension to mineralisation and an eastward extension of a previously drilled thick pegmatite, along with some thinner ones. These holes were the deepest holes drilled so far at the project.

The drill program intersected more extensive pegmatite intersections and widely distributed multi-element rare metal mineralisation than was anticipated; highlighted by the discovery of a rubidium, tin and tantalum enriched 71 metre interval. The assays revealed evidence of Rubidium (Rb) enrichment in addition to confirming the existence of Tin (Sn), Tantalum (Ta), Lithium (Li), Cesium (Cs), and Niobium (Nb). One hundred and ninety-seven (56%) of the samples returned Rb values exceeding 1000ppm, with a peak value of 4943.3ppm (0.49%). Pegmatite samples were enriched in Lithium, but not to the same extent as Rubidium. Better Rb intersections are summarised in Table 2. 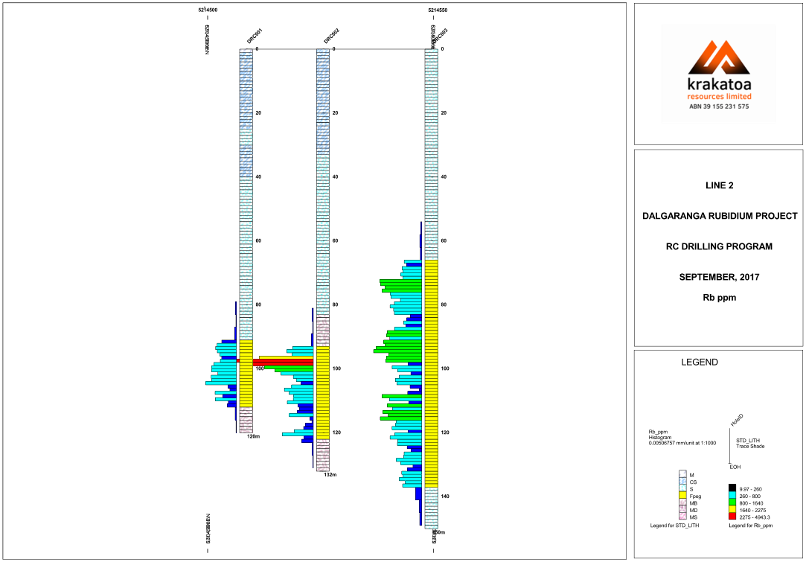